Sensors are one the fundamental components in every control system. In other words you can control a parameter just when you can measure it or its effects. In a motion control system, where you are dealing with controlling and adjusting position, the main parameter which should be measured is position. Encoders are sensors which are used to measure position. They are available in the market in different models with different accuracies. If you are interested in digging deeper into their structures, you can read the article about “Servo Motors”.

Inorder to integrate an encoder to a control system, There are multiple absolute position encoder standards. Some of them use RS485 or RS422 based serial digital interfaces with, like Biss or EnDat 2.2. Some others use ethernet-based protocols like PROFIBUS, PROFINET or CAN.

Optical encoders have a round disc. They use optic sender and receiver to detect obstacles. In an incremental encoder there is an potice sender on one side and an optic receiver on the other side of the disc. The optic sensor detects the crossing of the obstacles in front of it and generates a pulse each time it detects one. By counting the number of pulses, we can calculate the amount of angular displacement of the encoder.

Another way to increase the precisisty of the encoder data, is to couple the disk by a gearbox to the shaft.
One of the most common sensors used for encoders is optic sensors. Using them we can detect the presence of an obstacle. Using this technique, encoders can measure position or displacement.

Absolute encoders data streams to send the position. There are some protocols that are used to send data out of encoders.

Using digital interfaces has significant advantages compared to sending pulses, especially over long distances. Usually, raw pulses of an encoder are not trimmed well and over large distances can cause voltage spikes due to the series inductance. In addition, they can provide verification like CRC to show whether the signal has been read correctly or not. And last but not last don’t contain specific methods to consider the propagation delay and which can be so slippery. So it’s strongly recommended to use a digital interface to communicate with an encoder even when you don’t need the absolute position.

Here we get to know some of the most common digital interfaces to communicate to a digital encoder.

This protocol is mostly used in point to point configuration, when reading an encoder value. This configuration is based on two signals which are MA and SL. Every signal consists of two differential signals which are MA+, MA- and SL+, SL-. MA is the clock signal and also is used to synchronise the data transfer between master and the slave. The SL signal is used to transfer data from the sensor (slave) to the controller (master). Since this is an isochronous protocol, the gap between data frames is controllable and is determined by the MA signal. The data frame is illustrated in the following image

The MA and SL signals are HIGH when they are in idle state. To start data transmission, the MA signal strats clocking. The first rising edge of the MA signal syncs the encoder which is the slave. At the second rising edge of the MA signal, the encoder issues an ACK by lowering the SLO signal. Then the encoder generates the strat bit. Next is the CDS bit wich is wether generated by the slave device or is set according to the rules by the controller. The next step is the data section. The slave send the position data with the most signicfiacnat bits. This section is followed by two bits which are error bit (nE) and warning bit (nW). At the last section the encoder sends the cyclic redundancy check with the most significant bit first. So the data transmission is ended and the
The frequency of the MA signal can have different values and is somehow restricted by the cable length of the device. The following table depicts recommended values of the clock frequency for different cable lengths.

SSI is an acronym which stands for Synchronous Serial Interface. It’s unidirectional data transfer protocol over RS422 and is widely used for transferring data by encoders. 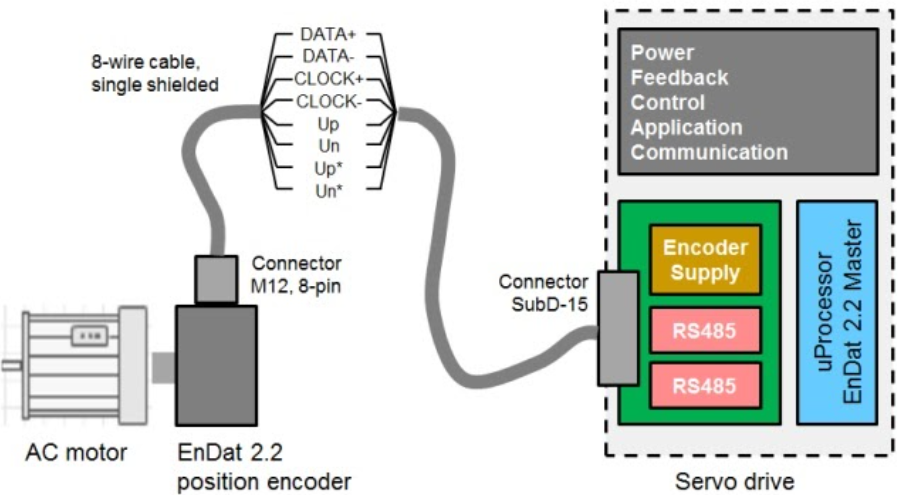 Clock is always generated by the master and data is bidirectional. The data line is bidirectional half-duplex. The data on the data signal changes at the falling edges of the clock signal. You can see the data frame of this protocol in the following image.

In idle state the clock signal is high. With the first falling edge of the signal, the encoder saves the position value. Then after two clocks, master sends the command to slave and request for transmistin of the position value. The slave first send three bits which are as follows:
S1: Start bit
F1: Error 1
F2: Error 2
After sending these bits, the encoder sends the position data with the LSB first. And the last section is the CRC value which has five bits, the ENDAT technology is offered by HEIDENHAIN.

HIPERFACE DSL is another digital protocol for absolute position encoders introduced by Sick. The main feature of this protocol compared to the other mentioned earlier, is its strong robustness which makes it possible to integrate power and signal cables. This feature makes wiring simpler and more neat. Some other features and characteristics of this protocol are listed below:
– The data can be sent using RS485 standard
– Half duplex communication to encoder is available
– The two differential signals are sent on encoder power lines which makes cabling simple. All the wires can be of one cable.
– The cable length can be up to 100 meters.

This protocol can be used in two or four wire configurations. When used in two wire configurations, some considerations on the frequency driver side are made. First a signal transformer is implemented to increase common mode rejection ratio. In addition a pair of inductors are used two couple the dc power to the signal lines and a couple of capacitors to decouple this power the dc voltage from the transformer. In the following image you can see the circulatory and component values recommended by HIPERFACE DSL.

Let’s have an overview on the Absolute encoder digital interfaces

Along with the digital interfaces discussed in the previous chapter, there are some other types of encoders that generate an analog signal in their output. In this chapter we are going to study some of the convenient analog rotary position sensors.

Resolvers are used to measure position and angular displacement of motors. They somehow are like electric motors aknv have windings. They have two main parts which are the stator and rotor. These devices,like encoders, connect to the shaft of a motor and to rotate.

Resolvers are multipole, meaning they can have multiple pairs of these poles. If a resolver has 2p number of these poles, its winding waveform cycles p time in every rotation of the shaft.
In the following picture, you can see a schematic of windings of a resolver. 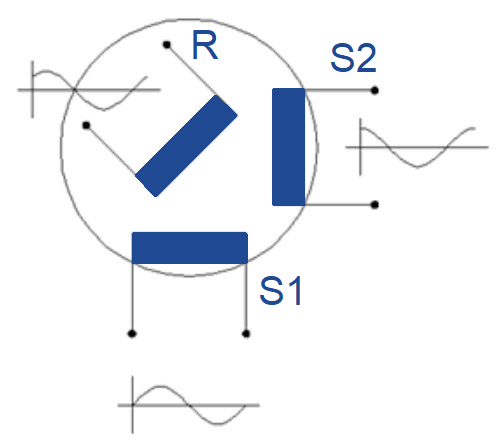 Sin/Cos encoder is another type of encoder that uses analogue signals to transfer data. IT generates two sinusoidal waveforms that have 90 degrees phase shift compared to each other. So one of them is called sin and the other is called cos output. It can provide much higher resolutions of position, which makes it suitable for precise motion control tasks done by servos. Since the output is an analogue sinusoidal waveform, the amplitude could be read in the controller side using high speed ADCs. This makes higher resolution measurement possible. Butr in an incremental digital encore, we are limited to the number of pulses it can produce in each rotation. Sin/Cos encoders use differential signals in order to decrease noise effects along the transition.

These devices call Tachometer are frequently used in industry to measure speed. A tachometer is a device that its output is dependent on the speed of the motor it is connected to and can not be used to measure position of a shaft. There are two main types of tocamoetrs. A tachometer with infrared inoyt uses a plus coming or reflecting from the shaft of the motor to measure its rotation speed. Devices using this technique are mostly portable and don’t need a mechanical cou;ling to the motor. Another type of tachometer, which is also called tachometer generator, generates a dc voltage in the output. These devices are kind of small dc motors that are used as a generator. In these motors, the output voltage is proportional to the velocity. Therefore by coupling this tacomotr to a motor shaft, it generates output voltage which increases by velocity almost linearly. So by measuring the voltage the velocity is measured.

Let’s have an overview on the analogue encoders