What Is an Induction Motor?

Induction Motors are playing a crucial role in our everyday lives, by powering up numerous industrial plants and systems from simple AC Blowers to very complicated and enormous Mine Excavation machines, they’ve been around dating back to 1887, but just recently due to the advent of Digital Signal Processing we have the chance to control them with the advanced methods like Field Oriented Controls.

Here in this article, we are discussing in detail the internal structure of the AC Induction motors and how they are controlled by VFDs and more explicitly how the Field Oriented Control is done with these Motors, we also show here a comprehensive dynamic modeling of an AC Induction motor with Squirrel case structure which can help in understanding them better.

An AC Induction Motor has two main parts:
–  the Stator
–  the Rotor

The stator contains a three-phase winding which consists of 3 phases displaced by 120 degrees from each other. These windings absorb power from the input power supply. There is a schematic down below which clarifies the positions of the windings in the stator. For example, a and a’ are two legs of the first winding.

The second part is the rotor which is electrically isolated from the input power. There are two types of rotors that have different structures, called wounded rotor and squirrel cage rotor.

Wounded rotor type:
The rotor is a three-phase winding. The terminals are accessible in order to implement desired connections according to the application. They have a more complicated structure and are more expensive compared to squirrel cage rotors.

Squirrel cage type:
The rotor is made of conducting bars which are connected by rings to each other at both ends. It has a rigid and simple structure compared to a wounded rotor and is less expensive.
You can see an image of a three-phase squirrel cage rotor induction motor below. 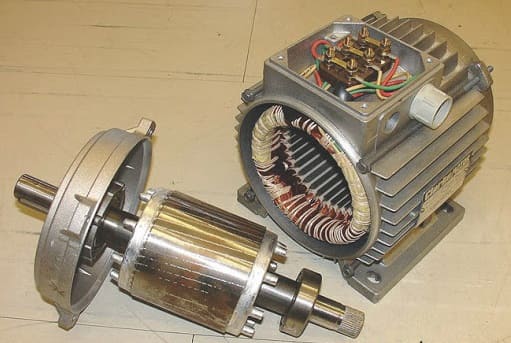 How Does an Induction Motor Work?

When an induction motor is powered by a three-phase symmetric power supply, each phase draws sinusoidal current. These currents can be represented by the following equations: 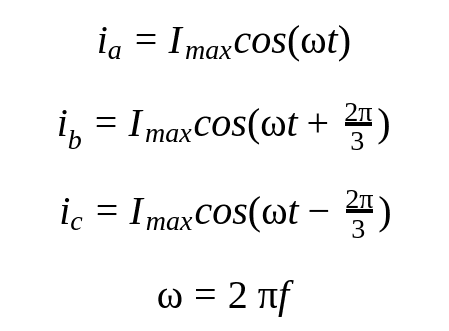 According to Maxwell–Faraday equation, each of these currents produces a sinusoidal magnetic field. By using superposition for these three magnetic fields, we find there will be a net magnetic field which has a sinusoidal shape in space. This field rotates exactly with an angular speed of ω around the air gap. The following equation describes its behavior in time and space:

We can represent the field using space phasor:

As this magnetic field rotates, a voltage induces in the rotor which generates a current flowing in its conductors. This current also creates a magnetic field. Now there is a magnetic force between these two fields which creates torque and causes the rotor to rotate. So, changing the frequency of the power supply changes the rotation speed.

We need a model to analyze dynamics of induction motors. The behavior can be studied using the mutually coupled circuits theory. So, we have a system of equations as below:. 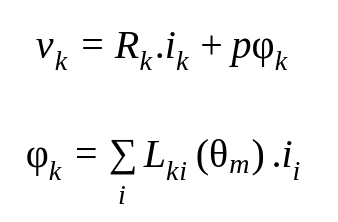 K: one of the six windings,
R_k: resistance of the k-th winding,
p: time derivative operator
ϕ_k: flux linked with k-th winding
L_km: mutual inductance which is function of mechanical angle θ_m between the magnetic axes of the rotor and the stator

There is also a mechanical equation which determines energy balance in motor:

The next step is to rewrite the equations for the stator and the rotor circuits. The space phasor method is used to have a more useful set of equations. It should be mentioned that the space phasor reference is fixed with the stator. 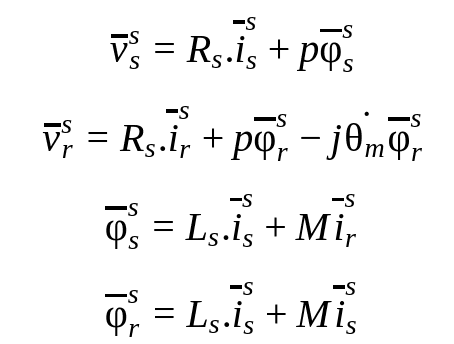 Now we have a model of the motor using five parameters Rs, Rr, Ls, Lr, and M. We can have a simpler model which uses four parameters to model the motor. Considering the fact that rotor is short-circuited and the definition of parameter L_ks=(L_s-M^2)/L_r, we end up the circuit below: 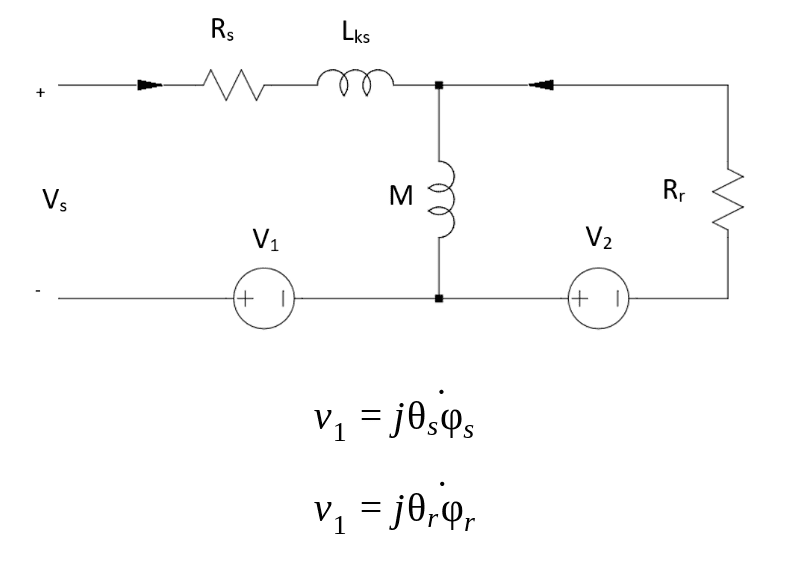 Now we have a set of equations which represent induction motor behavior: 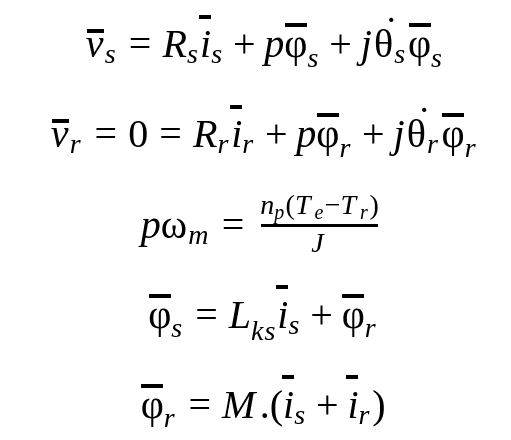 We have got some intuition about induction motors so far. Accordingly, we are able to see whether they are suitable for our application or not. As you know two main important drawbacks of a dc motor are the use of a commutator and brushes. But, none of these parts exist in an induction motor. These parts cause more maintenance costs and also make the motor size larger. In addition, they lower the reliability at higher speeds. These two parts have their own losses which reduce the overall motor efficiency and also limit the maximum power capacity of electric motors available in the market.

What is a VFD?

As previously define the VFD drivers work on The Applied Frequency of the stator component of an Induction Motor.

Variable Frequency Drivers are mostly powered by a single or three-phase power supply and generate a three-phase sinusoidal voltage. These devices do this task in two main steps:
1-  Converting input AC voltage to DC voltage,
2-  Generating three-phase voltage at the desired frequency.
You can see the schematic of a variable frequency driver below.

The AC to DC converter is a three-phase diode bridge. There is a low pass filter at the output of the converter which eliminates ripples of the DC voltage. The filter mostly consists of capacitors and inductors. The third stage is a three-phase inverter which converts DC voltage to a three-phase AC voltage using pulse width modulation (PWM). The inversion section implements PWM by power electronic switches like mosfets or IGBTs. You can see a more detailed schematic below.

The output AC is created by using PWM technique. In this technique every switch turns on or off in a specific pattern. Every switch receives a pulse through its gate and changes its state into short circuit or open circuit accordingly. We need to turn on and turn off the switches in a way that the created output has less possible harmonics. This method is called SPWM (Sinusoidal Pulse Width Modulation). The pattern is obtained from comparison of a triangle waveform which is called carrier, with a desired frequency sinusoidal waveform. For example, if frequency of 30 Hz is desired in output, we should compare a 30 Hz sinusoidal waveform with the carrier. You can see a picture of the procedure down below: 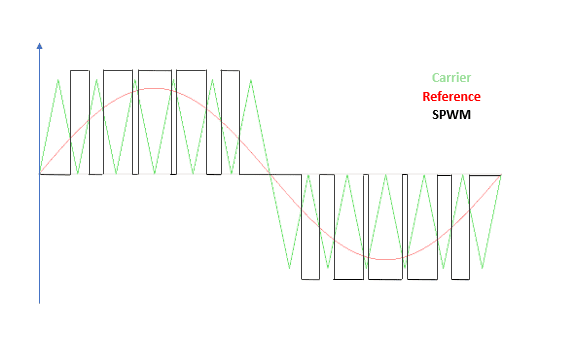 As you see when the pulses which are nearer to the minimum and maximum of the sinusoidal wave have longer duty cycles.

There is one more practical PWM technique to create sinusoidal waves called Bipolar SPWM. In this method, the carrier always varies between the positive and the negative values. 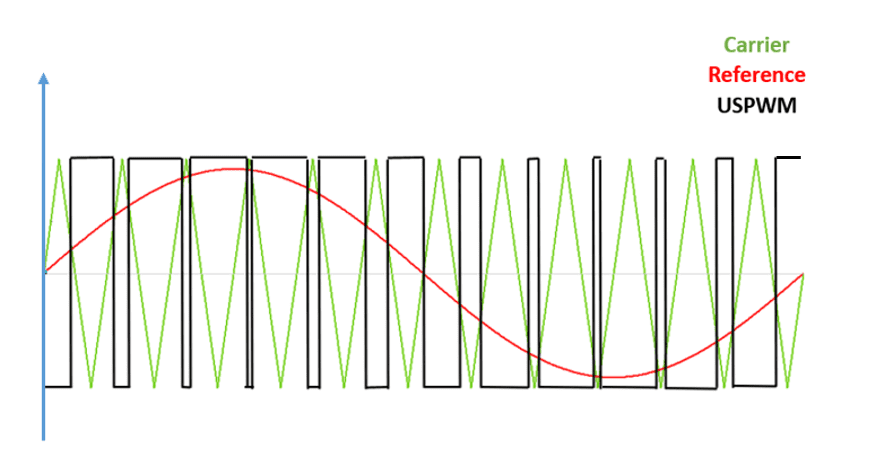 Although this method produces more harmonics compared to SPWM, it has a simpler switching pattern which makes it more practical and more favorable for industrial use.

When we want to implement this technique for a three-phase inverter we can generate a carrier with an MCU. The reference voltage of each phase has a 120-degree displacement compared to other phases. A comparator is needed for each phase to create pulses. You can see a schematic which describes the implementation of the procedure: 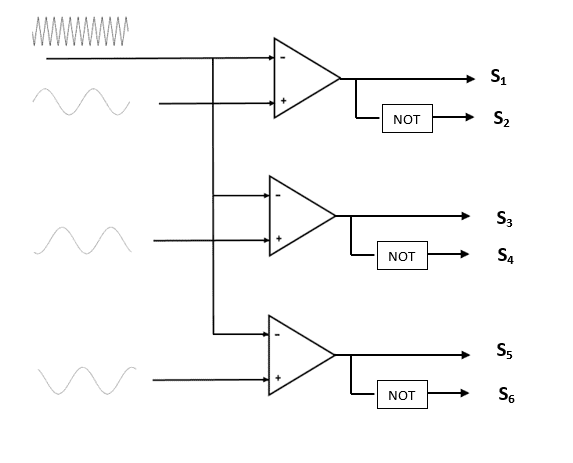 The frequency of the power supply determines the rotation speed of the electric motor. This method has good steady-state stability, it doesn’t have a good dynamic response. Vector control is a newer approach which has been used since the 60s. This method makes it possible to decouple input current into two independent fictitious currents. One of these two currents determines flux and the other one determines the torque of the motor. This feature yields better control performance in transients. This control method needs more calculations, but nowadays digital processors make it possible to perform a big amount of calculations needed in this method.

By using space phasor, we can have a completely decoupled situation, from a magnetic point of view. So, we can precisely define two orthogonal axes:
–   One is polar axes in the same direction of magnetic flux.
–   The other one an interpolar axis for the armature current

The main purpose of vector control is two find a transform so that we have a fictitious machine which has two decoupled electromagnetic circuits. So, we define two ports for the fictitious machine. We call the first port direct port or ‘d’ on which the excitation acts. It’s an imaginary circuit for the creation of magnetic fields in the air gap. A current flows in this circuit to create a magnetic field as what happens in an induction motor. The other one is quadrature or ‘q’ on which armature current operates which is proportional to torque.

Choosing the axes ‘d’ and ‘q’ so that that ‘d’ is always at the same direction of ϕ_r and doing some algebra, yields to following equations:. 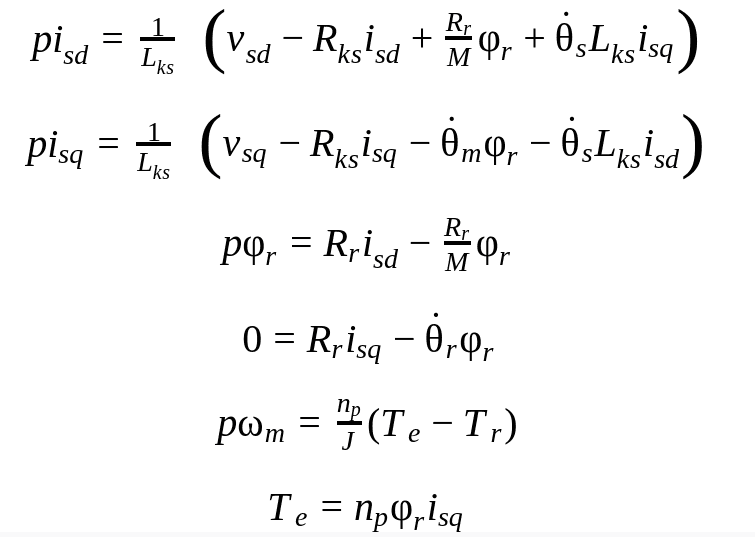 Vector control of an induction motor is a closed loop control process. The parameters which should be measured are flux and rotor position. Detection rotor position/speed is straightforward and can be done using an encoder. But measuring flux is a bit tricky. To measure flux, currents drawn by stator phases are also measured and the flux is calculated using currents and speed. In the following picture, you can see a diagram which explains currents and speed loops.

According to this procedure and equations of induction motor, we have the following diagram:

As you see, the desired i_sq and i_sd which are respectively determined by desired torque and desired magnetic field are fed to the current controlled voltage source inverter. Then, VSI generates i_sq and i_sd in order to control the motor.

Mechanical rotation speed of the motor is measured and is used to calculate i_sq ref and i_sd ref. In the picture below, you can see a diagram of the control unit. 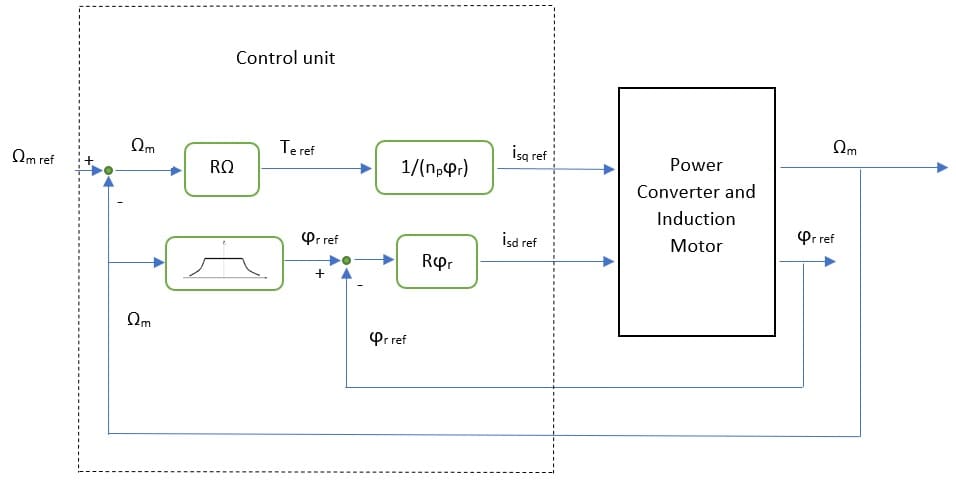 In this control loop, the rotor speed is measured and fed into the RΩ block. The output of this block is i_sq _ref which determines output torque. Also, Rϕ_r is used to calculate appropriate i_sd _ref. At low speeds, the motor should have a high torque regardless of speed itself. So, a filter is used to eliminate speed effects at low speeds. But at a higher speed, the flux should be calculated according to operation regions because the motor should work at its maximum power feedback.

Induction motors have many advantages over other types of electric motors which make them a suitable choice in many applications. As it is shown, their rotation speed can change by the power input frequency, a variable frequency power supply can be used to control the speed.These Devices generate three-phase voltages at their output using PWM techniques like SPWM USPWM or SVPWM. Vector Control is a method that simplifies an induction motor control by decoupling magnetization current and current which is needed to create torque. This decoupling is done by defining two vector currents named i_d and i_q. This method improves transient response and fastens its response to speed changes.